What’s in the yard? 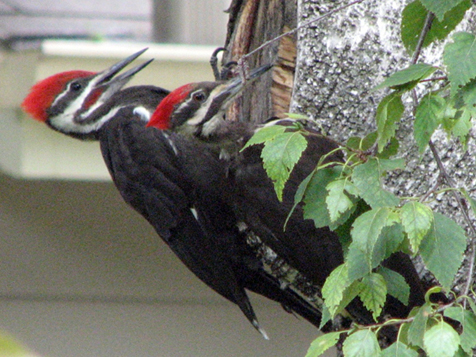 There’s nothing like the call of the Loon or the Pileated Woodpecker to make you aware you are somewhere in the North Woods. In my case it’s Minnesota, but not quite “Up North,” so we only hear our State bird, the loon, occasionally. Pileated Woodpeckers cover much of the Loon’s northern territory into Canada, and even more to the south and east in the United States. 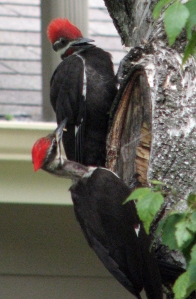 Whether its their call, territorial drumming or the rapping at trees for a meal, we have been hearing Pileated Woodpeckers in the neighborhood on and off since we moved in our suburban home over 20 years ago. We’ve always seen them in the yard individually, at least until this past Sunday morning.

The image to left shows the female holding a bug she plans to feed the male. His red crown is in full display mode. This feeding behavior is seen in many mating birds, however it is often the male feeding the female. (The female is in foreground in both images.)

For more information on the Pileated Woodpecker I recommend Nature Works. Below  the link.

Our yard has varying light and soil conditions. We have deep shade, dappled shade, morning sun, mid-day sun, and a couple of spots with nearly all sun. We have areas where the ground drains quickly and others where it is nearly always cool and damp. We have rich soil and poor rocky soil. Some areas have a large amount of clay, while other areas are predominately sandy.

A problem area in our yard for many years was the hill of fill coming off the northwest corner of the garage. After taking out the apple tree that had died and the raspberries that covered the rest it when we moved in, we built a deck (pictured  is the current deck). We enriched the soil with organic matter, and tried any number of shrubs, perennials and annuals on it. The only shrub that remains is just off the hill by the corner of the deck, a boxwood that is now over six feet in every direction. It’s visible on the right side of the image that will open to a larger one, if you click it. 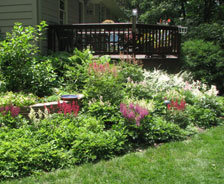 Astilbes turned out to be the answer.Since almost nothing else did well in the soil on that northwest facing slope, of which a large part only catches sun in the middle of the day, Astilbes are pretty much all we planted there. We had different kinds and varieties of Astilbe in several locations in the yard, but now most of them are on this hill. There’s also some Japanese Painted Fern and Ostrich Fern on the edges and to the back, as these grow almost anywhere in our yard.

The hill was also boring as it lacked a feature and something to separate the Astilbes from the hillside of Ostrich Ferns on the north side of the garage The ferns are shaded from the morning sun by the only apple tree still standing on the property, unseen, off the northeast corner of the garage.

Before re-arranging, transplanting and adding a couple more Astilbe three years ago, I built a short, nearly-circular retaining wall which features a Pinky Winky Hydrangea. The retaining wall adds a layer of visual interest and enabled me to enhance the soil for the hydrangea, which catches sun from late morning to mid-afternoon. To edge the inside of the retaining wall, I’ve put in some annuals along with some Lamium “Aureum” that will ultimately surround the hydrangea.

A large, striking and very interesting broad leaf plant is the Rodgersia. It’s named for Admiral John Rodgers, who brought one back from Japan in the late 19th century. These plants are ideal for a boggy shade garden. They like constantly moist soil and the leaves can dry out quickly in wind, so putting them in a protected and moist area is important. We don’t have a bog, so I planted these in a low area next to the woods in the southwest quadrant of our yard, which is rich in humus and always damp. They get some morning sun and are protected by ferns, shrubs and Pagoda Dogwood to the back, and flanked by Ligularia on the left, which also enjoy constantly moist soil and protection from the afternoon sun. 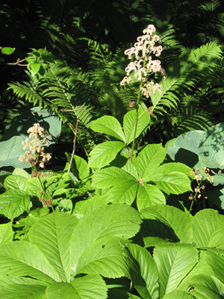 The Rodgersia have done very well in this protected spot. Additional protection is provided by some anti-deer/rabbit spray after the plants start coming up in the spring and until they are fully leafed out. This will insure a nice flower spike in late spring.

This picture was taken in June and shows their flowers, which have a slight licorice scent. Early in the season the leaves are a light to medium green, but as the season wears on they will take on an attractive bronze cast. It’s a great plant for contrast against the dark greens and purples of the Ligularia and the blue of the Sieboldiana hosta that can be seen behind them, and, not shown, the hosta “June” with its yellows, greens and blues bordering the lawn in front of them.